Recent political and economic developments spurred by global ambitions of certain countries have revealed the vital importance of food supply sovereignty for Russia as the basis for its social stability and national security. Implementing this in practice is closely related to the competitive potential of agricultural areas and their ability to provide the country with food supplies. However, most part of agricultural areas, which make up nearly 70% of the Russian Federation, is in decline with low living standards of rural population, the drift from the land, degradation of production potential and low labor productivity. These factors contribute to remaining high share of import of several types of agricultural products. Current political situation alongside with sanctions policy towards Russia and Russian countermeasures on banning import of agricultural goods from the EU, the USA, Canada and other countries have reinforced the issue of food supply market development in Russia on the basis of import substitution and the demand for relevant research recommendations.

The issues of agricultural areas development have been in the focus of research for many centuries since the times of the ancient Greece when practically all areas were agrarian. During the Middle Ages the ancient economic and geographical approaches were forgotten and only in the 16th century there appeared new studies on economic developments in different parts of countries. In the 19th century a German economist von Thunen laid down the theoretical and methodological foundations for farmlands development, describing the location model of agricultural production areas in relation to a consumption centre [1].

The 20th century marked further significant developments with seminal publications of the Russian researcher Semyonov-Tyan-Shansky, who characterized rural settlement types depending on physiographic and historical conditions [2]. However, during the Soviet period the issue of complex development of agricultural areas attracted little attention of researchers due to country’s primary focus on achieving accelerated rate of industrialization.

Very valuable insights for the authors on competitiveness of the areas and application of marketing tools within the areas development management framework were in the publications by Kotler [8] and other researchers [9-11].

The present conditions of sanctions regime and import substitution policy in Russia call for more specialized and detailed research on building and developing national competitive potential of agricultural areas.

The paper presents the findings of the conducted research devoted to substantiation of applied research recommendations on how to evaluate and how to develop competitive potential of agricultural areas in Russia with the particular focus on the Republic of Mordovia. The paper also describes the methodology of complex evaluation of competitive potential of Russian agrarian areas based on the index approach.

The research was based on applying the regional model to implementing state agrarian policy. If compared with the industry model which brings the issue of rural development down to restructuring of the agrarian household with the maximum use of the resources of the territories with the highest potential, the regional model considers a territory as a complex of social and economic problems. Using agrarian territories only for agricultural production does not lead to balanced development in the context of their economic, social and ecological aspects.

For the needs of the research the authors used the term “agrarian area” instead of the current term “rural area” in official documents [12-14], to highlight the focus of the study only on the territories where the main economic activity is agricultural production and food processing industry.

The research was conducted on the basis of general scientific methods of analysis, synthesis, generalization, analogy and specialized methods of statistical analysis, mathematical modeling in economics, factor and indices evaluations, grouping method, correlation and cluster analysis. This gave the opportunity to evaluate the level of socio-economic development of agrarian areas and to build a mathematical model to evaluate their competitive potential.

The research draws the data from the official database of the Federal State Statistics Service of the Russian Federation, which presents socio-economic characteristics of the country, RF regions and municipal entities.

The analysis of the agrarian sector of the Russian Federation (RF), its economic and geographical potential, rates and trends in demography, production capacity and dynamics of the economic activity revealed important statistics for the purpose of the present research. The overall performance figures of the RF agro-industrial complex (AIC) are directly correlated to the level of optimal usage of current competitive potential of agrarian areas. Relatively high share of the agrarian areas is located in the Privolzhskskyi Federal Region. The most impressive example there is the Republic of Mordovia where 22 out of 23 municipal entities are agrarian.

To develop methodology of complex evaluation of competitive potential of agrarian areas the authors explored municipal entity level, taking into account the division of all RF regions into 4 types with respect to their development and agricultural use, potential and limitations [15,16]. Within a region of a certain type the differences between areas (municipal entities) have much greater variety. For example, in the regions of the first type, with primarily agrarian specialization of the rural area and favorable natural and social conditions for its development, there can be areas with the characteristics of the regions of the second type, with multifunctional agricultural economy, suburban type of agricultural households and favorable social conditions for the development of rural area. The regions of the first type can also have some areas of the third type, which have unfavorable social conditions for rural area development and big zones of socioeconomic depression, and the fourth type with weak local development and unfavorable natural climatic conditions. The Republic of Mordovia is characterized as the type one territory with predominately agrarian specialization, favorable natural and social conditions for its development. The city of Saransk as the territory with marked industrial specialization was excluded from the research base.

Given that the competitive potential of agrarian areas is an aggregate of interrelated structural elements, for the purpose of the present study there was introduced a set of indices which encompass existing resources, factors and conditions encouraging or restricting optimal use of these areas (Figure 1). The authors identified 12 indices which are grouped into three indicative blocks with their corresponding integral indices in accordance with the authors’ evaluation model of competitive potential. 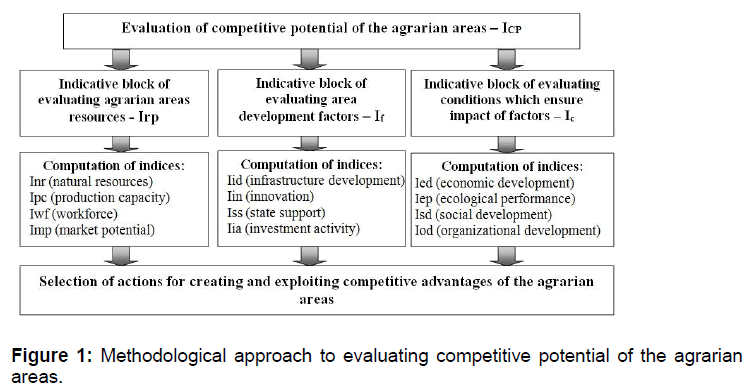 Calculation of the integral index of the competitive potential of the agrarian areas (Icp) is done as per the formula of geometrical average:

where Irp – index of resource potential of the agrarian area;

These indices, in turn, are inherently integral and involve multiphase calculations. For example, the index of resource potential (Ir) is evaluated by the formula:

where Inr–index of natural resources which determine agricultural production
opportunities, including quantitative and qualitative parameters of available cropland
acreage, climatic characteristics of the subject area;

Imp – index of market potential, estimated on the basis of its volume and growth rate and area proximity to big cities, population’s income levels and level of competition.
All indices are determined using the method of expert evaluations and ranking of an area on the basis of calculating its ratio against all-country parameters. Values of these indices can range from 0 to 1.

Cnr, Cpc, Cwf, Cmp are the coefficients of the equation and characterize natural, production, labour and market resources. Their values are determined using expert evaluations and depend on importance of a particular resource for the subject area.

The index of agrarian area development factors (If) and the index of conditions which ensure impact of factors and opportunities to use resources of the area (Ic) were evaluated by applying similar formulas and methods.

On the basis of these computations and multidimensional comparative analysis, there were determined integral indices of the competitive potential for the agrarian areas of the Republic of Mordovia at the municipal entity level and there were formed 4 groups (Table 1).

Table 1: Grouping of agrarian areas in the Republic of Mordovia based on the level of competitive potential.

The second group includes areas with average level of competitive potential. The agricultural production units are average in scale; crop and livestock production industries are at average development level.

The research findings proved the necessity to exercise differentiated approach focused on exploiting competitive advantages of agrarian areas, revealing new opportunity frontiers and growth areas, improving the mechanisms of financial support and integrated territorial development when implementing the measures of state regulation. Based on the presented evaluation methodology and the area group types the authors recommended tailored approach to the development of the agrarian areas in the Republic of Mordovia (Table 2). It should be noted, however, that the development of the most efficient integrated units in AIC in many cases would cross the boundaries of single municipal entities both internally within one RF region and also between different RF regions [16].

Table 2: Directions of the agrarian areas development in the Republic of Mordovia.

The undertaken research leads to the conclusion that to identify directions for agrarian areas development it is essential to take into account their competitive potential shaped by several factors, though the authorities cannot expect total self-sufficiency of the areas. The main focus should be on developing interrelations between areas and regions in order to increase labor productivity and cost-efficiency and to ensure improved economic activity in the areas with the most favorable conditions. This stipulates the need to consider the needs and strengths of neighboring areas when preparing programs for socio-economic development of a particular region.

The authors are expressing their gratitude to Russian Humanitarian Research Foundation for their financial support for the present research (Grant No 16-02-00030).